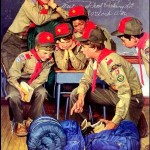 One of the hardest things for adult leaders to do is watch the boys conduct an activity while knowing it could be done better. Remember, if boys already knew how to do everything perfectly, they wouldn’t need scouting. Our boys have elected their leaders at all levels. They have been or are being trained to lead. These leaders are expected to lead. There is no greater peer pressure than when scouts feel their leaders are letting them down.

There may be times when you might see the adults in the troop standing by and observing. At such times, perhaps you think they should be involved. Herein, however, lies our method… the BSA method: the boys run this troop, with our guidance, and they need to have the freedom to conduct its business their way. You will see great successes and will witness great failures. This is scouting. Avoid the temptation to correct the boys and take over an activity. Stand back, let it fail, and it will become a learning experience. The boys will respect your patience and your confidence in their abilities.

The only instances when adult leaders should and do step into a situation is those that involve the health/safety of the boys or morally inappropriate behavior is occurring. Every adult in our troop is responsible for the safety of the boys. 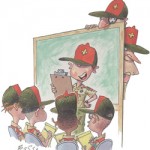 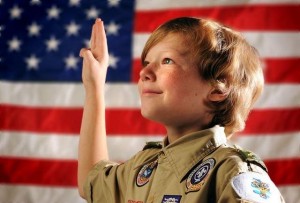 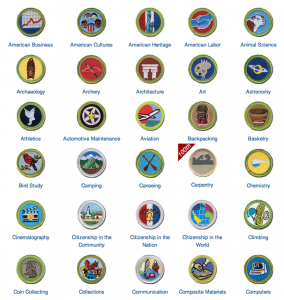 Recent BSA Research found that “inadequately planned and executed troop meetings were the number one cause for boys leaving Scouting.” 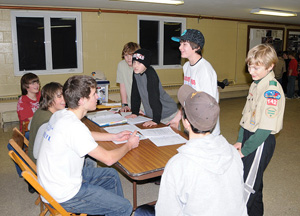 Responsibility for the conduct and content of a troop meeting falls to the scouts themselves. Troop meetings are planned well in advance by the senior patrol leader and the patrol leaders’ council (PLC).

Each troop meeting should have been planned the previous month at the meeting of the patrol leaders’ council and should assign specifics to the yearly plan created during the annual planning conference (usually conducted in early August). The senior patrol leader will have assigned patrols and individuals to take care of portions of a meeting, giving as many Scouts as possible the chance to contribute. The seven-part troop meeting plan provides the framework for efficient, well-run meetings.

The Seven Parts of a Troop meeting

The seven-part plan for troop meetings is an important guide, but use flexibly. The times noted in the plan are suggestions only and can vary to fit various situations. For example, the troop may be getting ready for a camp-out. The usual amount of time set aside for patrol meetings might be expanded to allow Scouts time to complete  their patrol camping preparations. A troop nearing the date of a district camporee may devote extra time to skills instructions so that everyone will be ready for activities involving the theme of the camporee, and the interpatrol activity can include an extended competition that also focuses on the key skills.

When the minutes allotted to one part of the troop meeting plan increase, consider shortening other portions of the plan. Every troop meting should be interesting and useful, and it should begin and end on time.

As Scouts begin to arrive for a troop meeting, a patrol leader or an older Scout assigned by the senior patrol leader should get them involved in a preopening game or project designed so that additional Scouts can join as they show up. The preopeing is often well-suited for the outdoors. Those in charge of the preopening activity should be ready to start about 15 minutes before the scheduled beginning of the meeting. Varying the activities from week to week will keep the preopening fresh.

Scouts whose patrol has been assigned to serve that week as the service patrol should use the preopening time to prepare for the troop meeting. The meeting room may need to be rearranged, chairs set up, flags displayed, and other preparations completed before the meeting can begin.

Call the meeting to order on time, instructing Scouts to line up in formation by patrol. The patrol responsible for the opening ceremony may conduct a flag ceremony and then lead the troop members in the Scout Oath and Law and the Pledge of Allegiance.

This portion of the meeting is devoted to the mastery of knowledge that Scouts need to participate fully in an upcoming activity, or upon skills they must learn to complete advancement requirements.

The skills to be taught at each meeting will have been determined in advance by the patrol leader’s council. Often the skills will relate directly to the month’s program plan for troop activities. Instruction should be hands-on learning rather than lecturing. All skill instruction should follow a simple process called the Teaching EDGE. First the skill is explained, then demonstrated. Then the learner is guided as he tries the skill. Enabling, the last E in EDGE, means creating an environment for the trainee to continue to be successful (like providing an opportunity to practice and use the skill).

Those who may be effective in teaching skills are the troop guide, instructors, junior assistant Scoutmasters, assistant Scoutmasters, and members of the troop committee. Older Scouts and members of the Venture patrol also can be effective instructors, though at most meetings they will be involved in their own activities.  Be sure to ask those leaders who you which to conduct the skills training as soon as possible after the PLC meeting.

Whenever possible, troop skills instructions should be divided into three levels:

Each instructional area should be separated from the others so there are no distractions.

End skills instruction on time and ask patrols to go their patrol areas for their patrol meeting. Patrol leaders will take charge of the patrols.

Matters to be dealt with during a patrol meeting include taking attendance, collecting dues, planning the patrol’s involvement in upcoming troop activities, selecting menus for hikes and camp-outs, assigning patrol members to specific tasks, and working out any other details for the smooth operation of the patrol.

Circulate among the patrol meetings and be ready to serve as a resource if a patrol leader asks for your assistance. If you notice that patrols have completed their work, call the patrols back together and move on to the next part of the troop meeting.

You or someone appointed by you can lead this opportunity for the patrols to interact with one another in a competitive or cooperative effort. The activity might be a game that will test the skills the Scouts are learning for an upcoming activity like pitching tents or tying knots, for example. Troop Program Resources has a wealth of games that foster friendly teamwork and competition,. The BSA manual Project COPE, No. 34371, also contains many appropriate games and challenges.

The closing of a meeting is the Scoutmaster’s opportunity to step forward. Ask everyone to sit quietly, then turn the meeting over to the Scoutmaster for reminders and announcements about upcoming events, and support of the patrols for their achievements and progress.

The highlight of the closing will be the Scoutmaster’s Minute, a brief message built on one of Scouting’s values. As the concluding thought of a troop meeting, the Scoutmaster Minute is a message each person can carry home.

The “After the Meeting” Meeting (5 minutes)

Ask members of the patrol leaders’ council to stay a few moments after the closing to discuss with you and the Scoutmaster the quality of the just-concluded meeting. Offer praise for portions of the meeting that went well, and talk about ways that future troop meetings can be improved. Make a few written notes so that suggestions can be explored more fully at the next patrol leader’s council meeting.

Here are some questions to ask:

Finally, review the troop meeting plan for the next meeting and make sure that everyone who will have a role is aware of the assignment and is prepared to do a good job.

To more smoothly integrate the Troop Schedule with other parts of BSA, here are some resources for coordinating plans.